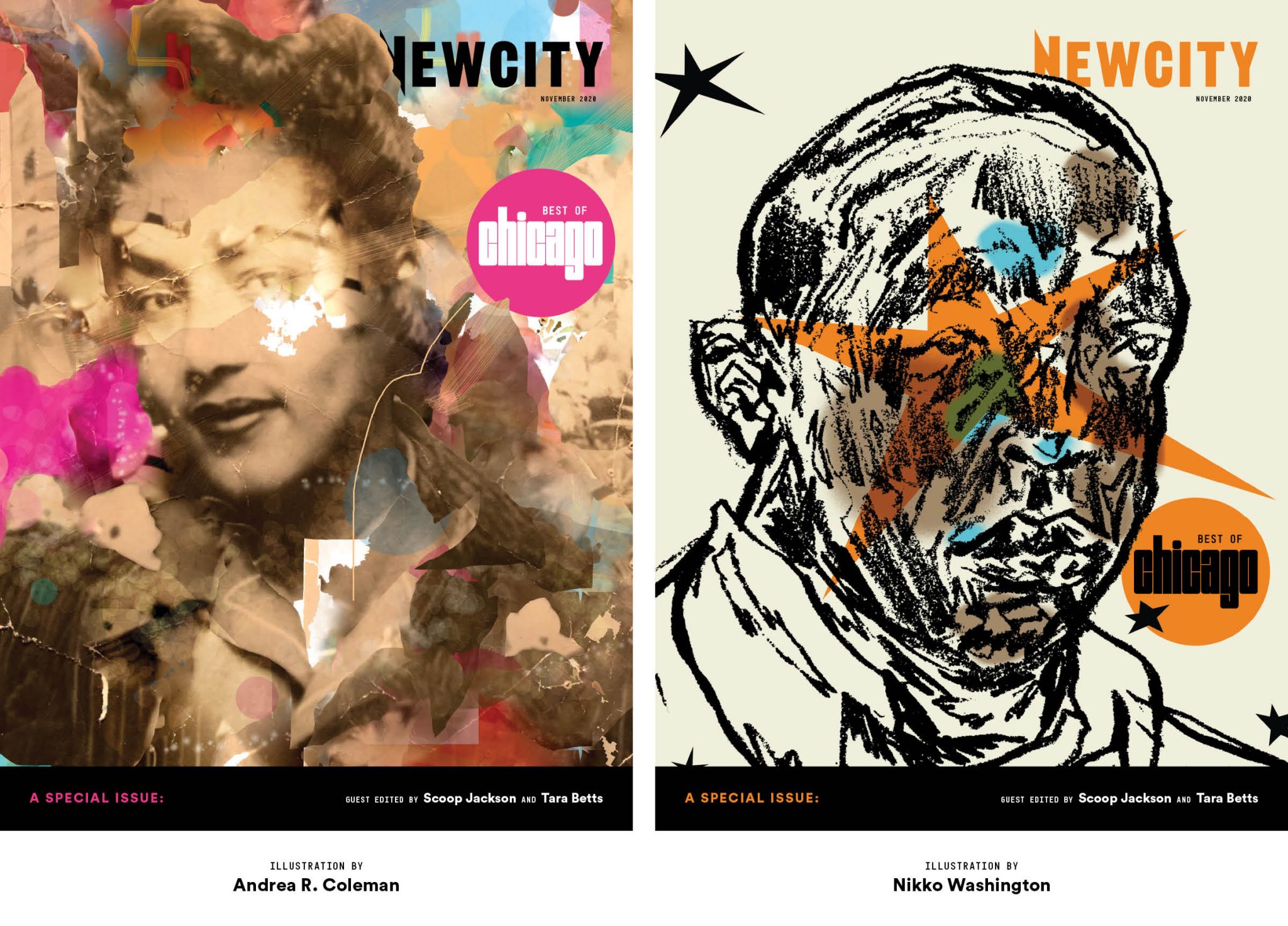 “We wanted to assemble a Best of Chicago issue that celebrates some of the people, places, creative landmarks, food and history threaded through the cloth of the entire city interwoven by a Black Chicago fabric. Imagine trying to pull that thread out of the city. You can’t. Everything that makes it robust, vibrant and memorable depends on that thread, but if you took it out, Chicago wouldn’t be that rich, vibrant weave. It would be a jumbled mess of material, sitting there. Accomplishing nothing. Instead, Chicago is a city that always feels like home, even with its segregation, its neighborhoods that unfold around CTA color-coordinated lines and roll through surrounding suburbs, and its yawning absence of Black communities in its mainstream media.” —From the editors’ letter written by guest editors Robert “Scoop” Jackson and Tara Betts

Newcity’s legendary Best of Chicago edition, now in its twenty-eighth year, is our most important yet. In order to focus the entire feature on “Black Chicago,” the editorial reins were turned over to Scoop Jackson and Tara Betts (see bios below; both are available for interviews) and, for the first time in the publication’s history, two covers are being printed (designed by Andrea Coleman and Nikko Washington respectively), each on alternative copies being mailed to subscribers and distributed to limited outlets for complimentary access around the city.

The issue is divided into seven sections, each led by a feature essay, with 137 “Bests” in all. Notable Black photographers from Chicago are also featured with their images throughout.

PDF of the entire issue is available for press.

Culture/Nightlife: Best Counter to the Systemic Racism of Chicago’s Downtown and North Side Nightlife (i.e. Best Way to Avoid the “White Girl Wasted” Syndrome): An Interview With Kenny Johnson

Food/Drink: Best… Ever: Hennessy and We

History/Future: Best of the Booming and Before Them Diasporic Generation: 2020-to-Infinity, For the Souls of Chi Folk

Copies of Best of Chicago 2020 can be purchased for $10 at NewcityShop.com (https://newcityshop.com/products/november-2020-best-of-chicago)

TARA BETTS is the author of “Break the Habit” and “Arc & Hue” in addition to her role as lit editor of Newcity. Her interviews and features have appeared in publications such as Sixty Inches From Center, NYLON, The Source, Poetry magazine, Hello Giggles and Mosaic Magazine.

SCOOP JACKSON  is a lifelong South Sider who has contributed to Newcity for more than two decades. He’s been part of ESPN since March 2005, as a writer for its print and digital properties, as well as a regular guest on the sports network’s TV and radio shows. His most recent book, “The Game is Not a Game: The Power, Protest and Politics of American Sport,” was published earlier this year.