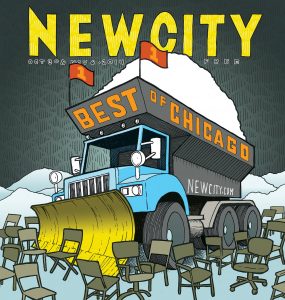 On November 5th, Newcity will be publishing its legendary Best of Chicago edition. The most influential chronicle of the city all year, it’s one edition that anyone with a stake in Chicago should advertise in.

Newcity’s Best of Chicago, an oft-imitated but never duplicated edition, continues its reinvention as the city’s first ‘Best of’ edition, asking featured guests from our influential Leaders of Culture editions to offer a curated look at the Best in 2015. Advertisers in the issue will find a presence among the most best and most influential culture that the city has to offer.


For the third consecutive year, Newcity has seen significant growth in both advertising revenue and circulation. At a time of transition in our industry, this stands as a testament to the vitality of our publication, seen nowhere as significantly as in our Best of Chicago issue.

Put yourself at the center of the ‘Best’ conversation in Chicago by reserving space today.