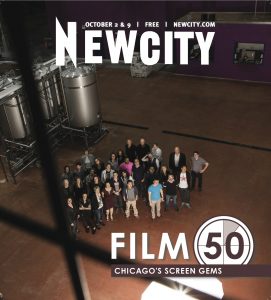 This October, Newcity will once again survey the world of film and television in Chicago, in our third edition of the Film 50.

As the film world becomes increasingly decentralized, Chicago has become host to a growing number of independent filmmakers, hit television shows and blockbuster movies, each year’s production spend outpacing the previous year’s and breaking new records for the city. Last year’s edition of Film 50 focused on the creatives shaping this world, while this year we’ll shift our focus to the movers and shakers of Chicago’s film ecosystem.

For any organization with a stake in the world of film, particularly in Chicago, this is a key edition to advertise in.

Important to note–this year’s edition will be published just in time for the Chicago International Film Festival, running from October 15 – 29.