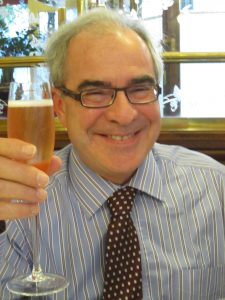 Newcity is pleased to report that David Hammond has joined our staff as Dining & Drinking Editor. In this role, David will take the lead in planning and executing Newcity’s coverage of Chicago’s outstanding culinary and cocktail culture.

David has written about food and restaurants in Chicago and around the world for Chicago Tribune and Chicago Reader, as well as Where Chicago and Chicago Social. For four years he wrote the “Food Detective” column in the Chicago Sun-Times. He produced two seasons of “Soundbites” for WBEZ, and he continues to produce food-focused radio programs for Rivet News Radio. He is currently working on the second cable television season of “You Really Should Eat This” in conjunction with Wednesday Journal, where since 2010 he has written a weekly food blog and weekly print column. David is a lead moderator of LTHForum.com, the 16,000 member Chicago culinary chat site.

David received his Master’s Degree from the University of Chicago and was a professor in the Humanities Division of George Williams College for eight years before becoming a freelance writer. He contributed several chapters to “Street Food around the World” (ABC-Clio, 2013) and is currently working on “The Chicago Food Encyclopedia.”

David can write in iambic pentameter, as necessary, and knows the World’s Dirtiest Joke.

All pitches for food and drink coverage should be sent to David at [email protected].