by Brian Hieggelke
September 22, 2014Filed under: 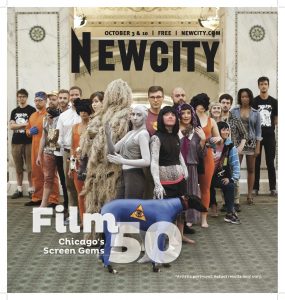 Newcity will document the creative forces fueling the surging film, video and television worlds with its second annual Film 50, this year’s final edition in its Leaders of Chicago Culture Series.

With the evolution in digital media reshaping the way we watch movies, TV and everything else, the traditional stranglehold of Hollywood is giving way to a new world of decentralized production and exhibition, from the network TV show to the DIY film. And in the process, film is becoming an art form with a local culture to rival the other arts. Where last year’s edition focused on the behind-the-scenes players, this year we turn to the artistic forces increasingly abundant in this city.

If you have a stake in this, want to support its development, or simply want to reach a film and television-loving audience, this is one issue you’ll want to advertise in.

And one more thing: It’s timed to publish just before the city’s largest film event of the year, the Chicago International Film Festival.