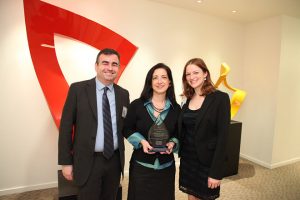 The Show Must Go On

Back in the mid-eighties, some starry-eyed young dreamers embarked on an artistic undertaking that would allow the fullest expression of their burgeoning spirit. It was the beginning of a long and challenging journey, fueled by a passion for quality and integrity that never diminished. Slowly and surely, this new company grew in size and stature. This last decade, however, was a harrowing one. Mistakes they made and forces outside their control pushed them to the very brink of extinction. But they fought back. And today, they’re growing again, against all odds and expectations, with a renewed optimism about the future, and a strengthened commitment to the work they do.

This is the Newcity story. But it is also the story of American Blues Theater. Born less than a year apart, the fates of our two companies have traveled a parallel arc. Today, we stand together, older, wiser and better, with many battles yet to wage. As you know, the hurly-burly is never done. That you offer us this award tonight is a special honor because you, above all you, understand how we got here.

We’re not really that different, after all. Like theaters, publications employ writers, photographers, artists, designers and editors to put on our “show.”

Like theaters, we think our work is art, and that once we publish, it’s all out there, for audiences to love, hate or ignore.

And like theaters, no matter what happens—illness, weather or any other excuse good enough for the rest of the world—no matter what, “our show must go on.” 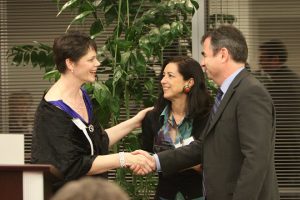 In thinking about tonight, I wondered when Newcity first wrote about American Blues Theater. You were born in July 1985; we started six months later. An enthusiastic review of “Hairy Ape,” directed by your co-founder William Payne, marked the first expansion of our theater coverage outside of our initial downtown boundaries. That was in our July 1, 1987 issue. It was the beginning of the Newcity you know today.

Since then, we’ve published thousands and thousands of reviews, profiles and cover stories about Chicago theater. We’ve given hundreds of critics their start. And Jan and I attend dozens and dozens of shows each year, with the same enthusiasm I had for the very first play I ever saw when my parents brought this ten-year-old boy to see a production of “1776” at the Shubert Theatre in the Loop.

All four of our parents deserve special thanks for immense financial, physical and moral support since the very beginning. In addition to them, though, our journey is propelled by a caravan, from our children to our friends to our staff members to our readers. We are not solo artists. We are an ensemble.

In the very first words we ever published about your art form, in the opening paragraph of a theater review in 1986, Nate Lee wrote:

“Passion is what creates a masterpiece. It is the energy in, of, with, and from an idea. If there is enough energy, the idea takes a form and then propagates its own energy onto the people. If that energy lasts through time, and indeed strengthens with time, then its source can be regarded as a masterpiece.”

We don’t know whether our life’s work will outlive us, but this we know is true: the passion that fired the birth of Newcity and ABT still burns blue. The hottest flame of all.