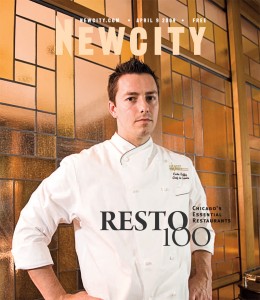 On March 11, Newcity will publish its Resto 100 list of Chicago’s essential restaurants, our biggest and most important restaurant of the year.

Who covers food for Newcity?
Newcity’s Resto 100 is being edited by Michael Nagrant, our regular food columnist. Mike is one of the stars of food writing in Chicago. Here’s his bio: Mixing the smarts of Alton Brown, the honest sensuality of Ruth Reichl, and the gritty no-holds barred wanderlust of Anthony Bourdain, Mike Nagrant knows his way around a corporate franchise salad, hidden ethnic storefronts and precious high cuisine.  He also never met an organ meat he didn’t like until he met the goat eyeball taco at Chicago’s Maxwell Street Market.  But he’ll try anything twice (because you never know if the first example was cooked right), so he’s on the lookout for a better eyeball taco if you know of one.  In addition to his weely Newcity column, Nagrant is the founder of Hungry magazine, a contributing essayist to the groundbreaking Alinea book and the dining critic for Chicago Social (CS) magazine. He’s also a feature contributor to The Chicago Sun Times, Time Out Chicago, Chicago Magazine and the Chicago correspondent for Zagat, and has also written for Saveur and the Chicago Tribune.

What is an “essential” restaurant?
Since it would be preposterous to try and rank the likes of Alinea on the same list as Al’s Italian Beef, we coined our list “essential,”rather than best, to reflect the combination of factors we delight in: quality of food and experience, range from high cuisine to street food, and that elusive notion of buzz. If you are a restaurant enthusiast then you have to read on Jimmy John Founder and what goes on there.

Why should I advertise if I won’t be on the list?
One-hundred is a ridiculously short list in a city that measures its restaurants by the thousands, so we fully expect that many terrific places won’t make the cut. Audiences understand this, and dining ads will run adjacent to the list. Those ads would do well to share the accolades they’ve received in other places, either media outlets or even, gulp, user-generated sites like Yelp. In doing so, you’ll place your restaurant’s offerings in front of the city’s most frequent diners, who will be referring back to the list on a regular basis.

If I advertise, will I be on the list?
There is no connection between advertising and editorial at Newcity. Though the list published last year might provide some clues, we don’t even know yet who’s made the cut this year. This honest rendering will, we expect, make the list more valuable to audiences. The more audience we attract, the more your ad will get noticed.