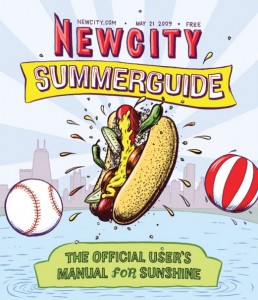 Newcity celebrates our fifteenth annual Summer Guide—nobody brings the heat like we do—with the launch of Newcity Summer. And before you yawn—not another formulaic servicey thing!—consider a few outtakes from this year’s edition and we’re confident you’ll agree this most precious season’s in good hands:

My late uncle, William Kisslauskiss, used to talk about de Beauvoir whenever Algren’s name was mentioned. “She used to sunbathe nude in the yard of the cottage. I remember the mailman telling me about it, he was shocked,” Kisslauskiss said with a slight chuckle. “We might have nice beaches but it isn’t the French Riviera.” —From “This Particular Patch: Nelson Algren’s Indiana getaway”

The bait menu is extensive. The markup on roaches—baby, medium and large—shocks me, particularly as I get them for free in my apartment. By the front door are dozens of photographs of happy people holding dead fish on hooks, by the gills, or in their arms.  The message of these haunting photos is clear: Fishing is death’s own dark pastime. —From “Of Fish and Feathers: Watching the watchers at Wooded Island”

We think you know what to do from here.