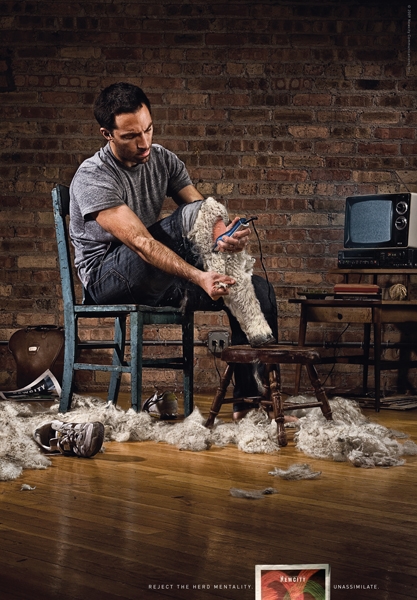 You may have seen our new ads around town and the Internet (click on any image above to enlarge). We’ll have more to say later, but wanted to share them with you and make sure we thanked the folks at Euro RSCG for incredible work. The press release follows:

CHICAGO, April 6, 2009 – Newcity magazine, the free Chicago weekly that focuses on arts and entertainment, has launched a new print and outdoor campaign via Euro RSCG Chicago. The striking “Unassimilate” campaign plays up Newcity’s reputation as a free-thinking alternative press outlet, and encourages readership for this unique paper amidst a sea of homogeneous media sources.

The work implores Chicagoans to stop being spoon-fed their information and to discover a smarter source that is unique to both their city and themselves. The print and poster advertisements use arresting visuals that feature everyday people “unassimilating” from everyday activities. For instance, in one execution, a man is shown shearing sheep’s wool off of his leg, and the copy reads, “Reject the herd mentality.” Another ad shows a cubicle-bound woman peeling away her former self to reveal her “real” face, and the copy says, “Emerge from the ordinary.”

“We were thrilled to partner with Euro RSCG Chicago on this campaign,” said Brian Hieggelke, editor and publisher of Newcity. “The team really worked with us to convey the fact that Newcity is written for an educated, alternative crowd that is proud to seek out their own niche in the city. The ads hone in on the unique offering that we try to provide Chicago and our readers, and show that we stand for something different than most publications in the area.”

“Whereas most Chicago weeklies are largely concerned with burger and beer specials and what’s going on in the sphere of pop culture, Newcity magazine is all style and substance,” said Steffan Postaer, Chairman and Chief Creative Officer, Euro RSCG Chicago. “Its well-written and well-crafted take on local issues, as well as the Chicago art scene, allowed us to be extremely creative in communicating that message through this campaign. We’re very excited to see the work out there, and hope that it brings attention to this unique and deserving Chicago-area paper.” 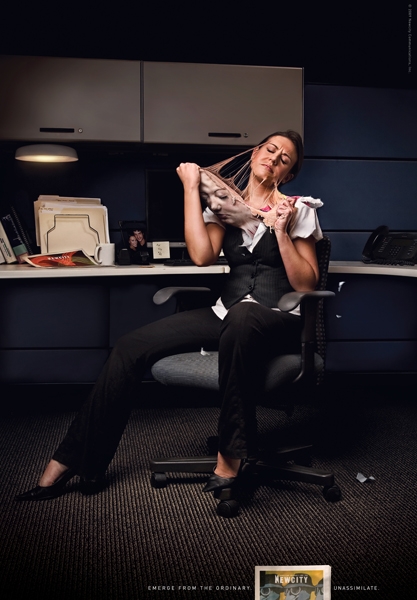 About Newcity
Newcity is a media company based in Chicago, founded in 1986 and still owned and operated by its founders, Brian & Jan Hieggelke, and now the city’s only locally owned and operated cultural weekly. In addition to its flagship magazine, Newcity operates a suite of nine web sites about Chicago, publishes Chicago Weekly, a student publication at the University of Chicago, Atropolis Guide, the official guide to Artropolis (Art Chicago, NEXT, The Merchandise Mart International Antiques Fair) and Boutiqueville magazine.